My trumpet teaching and trumpet books have been mentioned and quoted in dissertations, magazines, other books, web sites and even youtube videos.

Dear Mr McLaughlin,
“The subliminal (Sleep Learning) Downloads” I received from you a few weeks ago are very helpful to me. I had to play Brahms trio last Friday (I’m playing French horn) and it was the first time since my first BIG stage fright (30 years ago) that I played without fear. I am so interested by everything I read on your site, especially about lip compression; all of this is so helpful for me. So, I thank you very much!

These are simple wav files of about 7-8 megs. Many programs will burn it to CD if you want it that way. You can loop it and play it all day or all night.
The background is rain and wind chimes and the chimes mask the words completely. You will NOT hear the words at all!

Subliminal Sleep Learning is passive. It takes no work and all that you do is play the CD in the background. I play mine at night while I am sleeping using a CD/radio/alarm clock.

These are simple wav files of about 7-8 megs. Many programs will burn it to CD. You can loop it and play it all day or all night.
The background is rain and wind chimes and the chimes mask the words completely. You will NOT hear the words!

The cost for each file is 10 dollars and is available using paypal. Or you can get all 5 for 30 dollars.

I sent the letter below to a large group of pro players, college professors, and some well known internet forum readers to see what they thought. 95% responded and ALL of them wanted to know when they could order one. That led me to believe that I am NOT alone in thinking that this MAY be useful to some people.

I was pleased that within 12 hours of posting this on TPIN both a working Psychiatrist, and a working Psychologist wrote to thank me for doing this. Before I did this I consulted 3 in clinical practice and when I sent my letter out 2 weeks ago for feed back I got another therapist thanking me. That was 6 people working in the field of clinical Psychiatry that liked my idea.

We all laugh at the fact that alcohol ads almost always have people in skimpy swimsuits but we know that they do it to suggest the fun we will have.

Some are more subtle like the Mr. Clean stand-up in the store. It reminds you of the TV commercials where he cleans the dirty house. Or the scissors at Wal-mart to remind you of the ads that claim they are the store that lowers prices. Those are still subliminal ads they suggest things at a subconscious level.

Yes we all know that the popcorn sales and coke sales subliminal in 1957 used made up numbers (sales increased but nobody really knows by how much). BUT subliminals have been used by many department store chains since the 70s to help stop shoplifting. There were articles about this in both Time and The Wall Street Journal citing the % that shop lifting was cut in the first 6 months they used the subliminals. (They are STILL played in stores.)

Studies unfortunately are a lot like opinion polls and are easily swayed by the viewpoint of the one running it.

A subliminal ad won’t make you start smoking if you don’t already smoke but it can get you to pick a brand to smoke. See it won’t make you do anything that you don’t want to do, but it may help kick start something that you do really want.
Thousands of people go to see hypnotists for smoking, eating and drinking disorders every year and some are helped.

Through the years I have given lessons to several psychologists. All of them have stated that they fully believe many playing problems and in particular the problem of stage fright is more psychological in nature than physical.

I have through the years asked these clinicians several questions including; Why take lessons if many problems are psychological? I was told that to break free you have to give your subconscious a reason to believe the problem is solved.

I also asked about subliminal things like Sleep CDs. I was told that while subliminal suggestions would NEVER make you do something that you didn’t want to do (like getting your boss to make you a full partner LOL); they do have some success in helping people do the things that they just didn’t seem to conquer on their own. I was also told that subliminal messages are better at this than affirmations because many people have such low self esteem that they subconsciously reject the affirmations.

I asked specifically about stage fright, confidence and playing in general. I was told that they would add desire to practice to the list. I was also told that those were areas that may show improvement through the use of subliminal tactics.

This has been on the back burner for years but in August of 06 something changed. My wife has had severe insomnia for a couple of years now and nothing has helped. Even the strongest sleeping pills give her a few hours of restless sleep at best. I bought and tried a subliminal CD to aid sleep. By the end of a week she stopped taking sleeping pills. By the end of 2 weeks she was getting at least 6 hours of sleep a day. (It is not always as restful as we would like but it is so much better that her health and blood pressure have both improved.
This really impressed me and so in October of 06 I bought a subliminal CD for exercise. It is difficult to make myself do the things my cardiologist wants because exercise often induces angina and of course that is both painful and scary. No I am NOT fit yet but I have used our exercise equipment 6 times a week since I started using a subliminal CD. I have doubled my workout time since I started too.

Those 2 things got me wondering about subliminal CDs and playing again.
I asked a subliminal CD company about this and was told that they get requests for diet, exercise, picking up dates, marriage fitness, confidence in the workplace, and several topics I won’t even mention. However; they have never been asked about trumpet playing.

I commissioned them to make me some subliminal CDs for trumpet playing. I did this because based on how this process has helped my family so far I think it is worth trying.

There are things that I thought might be a good idea to include but I was told NO.
My point is that there has been quite a bit of thought and discussion into putting only the things that couldn’t hinder the player and were only positive.
An example is that I thought You are a great player, was a good line. I was told that for some people hearing GREAT 500 times a day would give them a swelled head and isn’t the kind of message we wanted to send.
Instead things like; you have a pleasant sound and many people enjoy hearing you play; left a positive message but did not encourage one to get too big an ego. 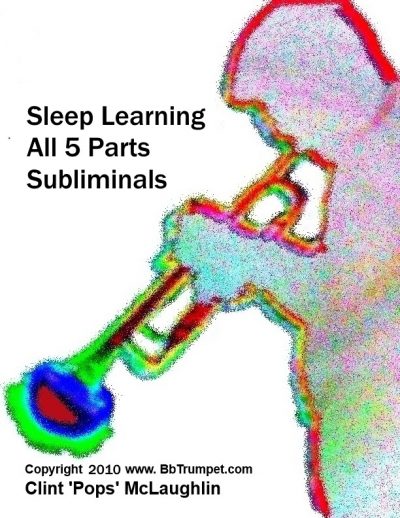