Self defense: Easy self defense moves that could save your life

50 simple quick and easy self defense moves anyone can do.

I was exposed to several different types of martial arts when I was young. That exposure showed me that different styles used basics (like blocks) with vastly different results in mind.
To better understand this I studied Aikido, Hap ki do, Judo, Karate (both Isshin-ryu and Shorin-Ryu), Kempo, Tae kwon do, Tang soo do, and Wing Chun Kung Fu.

I taught music (Trumpet) full time (hence the BbTrumpet website), but 2 nights a week and on Saturdays, I also taught self defense and Black Belt classes at a large training center. It had over 1000 students and over 150 Black Belts.

This Self Defense Guide has been used by countless people in the last 25 years and I decided to scan those 25 year old negatives and do a PDF of this guide.

In the early 80s I had a Jr high student that took 1 intro self defense class.
2 weeks later his family signed him up for classes. He had been attacked and broke his attackers arm using the wrist lock and arm smash to the elbow combination that is shown in this guide.
1 class helped him to defend himself.

There are over 50 techniques in this self defense guide, illustrated with 133 color pictures. 2 of them are shown below:

One way out of a head lock is to punch him in the groin.

Notice how she prepares for the strike by trying to get her weight and hips turned away from the punch.

She then hits him with a hammer fist (explained in detail earlier in the book).

Next she pulls his hair to expose his throat and then punches him in the throat.

Against an overly friendly person (well you get the idea) you could deliver 2 elbows backward.

Grab your hand first so that you can use the strength from both arms for the strikes. (Elbow strikes are explained in detail earlier in the book.)

Notice how she pulls the hands away and loads the weight for the strike*.

She delivers an elbow strike to the solar plexus.

Notice how she pulls the hands away and loads the weight for the second strike also.

Notice how she pulls the hands away and loads the weight for the second strike also. 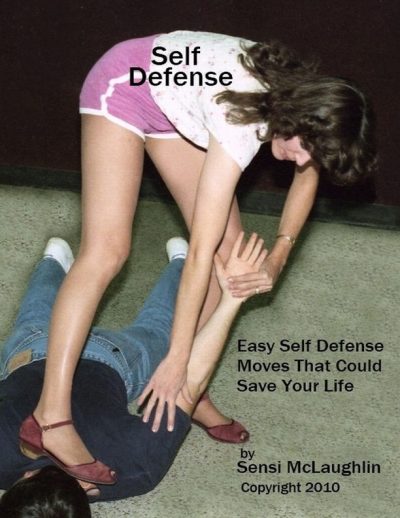