Here is a sample of the kind of info you get. This is NOT included in the 6 hour course, it is a free sample.

Here are a couple of testimonials I have been getting on the 6 hour trumpet lessons download.

Thank you so much for putting this up for download, it has been incredibly valuable to me as I had all but given up playing and this is making things so much easier!!!
Everything sounds better, low notes fall out of the bell and I can get some sizzle on a High C without too much problem.

I want to thank you for making the 6 hrs of recordings available. I have been listening to them and the results have been spectacular. Using what I have learned so far from the tapes I can feel the vibrations inside the aperture tunnel instead of at the front of lips. My sound is more resonant and my chops don’t get sore the way they used to.
I had pretty much given up on the trumpet until I listened to these recordings. What I have heard so far in the recordings has given me a new approach that is working. Once I get through the recordings I would like to take some lessons.

I had someone come for a trumpet lesson that was finishing his Masters and who had Focal Dystonia. Because of the Dystonia he couldn’t much and didn’t want to.

He came with QUESTIONS.

If I had known the lesson was going to be that I would NOT have used the 10 dollar mike on my computer. I would have used the video camera and the 300 dollar mike. BUT the whole thing was an accident. It just happened.

I decided to not erase the lesson. I wanted to listen to it and use the notes for book topics… It was just TOO good. Yes there are cracks and pops but we managed to edit most of them. I sent the files to some of my students and all of them learned things from the files. (There are many with degrees in the group even DMAs.)
I finally decided that the info was just TOO good and there was TOO much to not use it as a teaching tool.

There are 6 hours of audio of these and during the trumpet lesson at one point I play High C using the Stevens, Maggio, Super chops, Farkas, Buzzing and overlapped embouchures (to show that all embouchures have potential) and also play High C,D,E,F,G while holding the horn by 1 valve stem. Yes they would sound different if I warmed up, held the horn instead of suspending it from 1 valve, changed mouthpieces when I puckered (which puts more lip in the mouthpiece, or changed when I curled (which puts less lip in the cup) but the point was to show boom boom boom these embouchures all play. I think that people will be amazed at the power possible with no pressure. (I don’t play that way but we need to realize that pressure hinders vibrations and should NOT be how we control the notes). That was one of the times I wished it was video.

(answer)
Asking for physical change gives instant sound changes.
You heard that on the audio files.
Why were you surprised? Why take trumpet lessons if the teacher isn’t going to change anything?

The audio files are NOT going to be all rosie either. You will also get to hear MANY experiments with him later. Dystonia screws up what we do naturally and we have to look for what it will allow. That meant I had to test physical actions to see what they did for him. I needed to see where it failed and what the muscles were willing to do. 1000% easier withOUT the Dystonia but I thought that the process lead to good questions so I left it in.

I am selling these sound files for 60. It is the length of 6 music CDs and is 6 hours of trumpet lessons. (A couple of my students seriously suggested between 200 and 250 dollars.) A minute or 2 after you pay; an email will be sent to you. If you have problems send us an email. We check emails every night and will resend the download info for the book.

60 dollars for 6 hours of audio files. 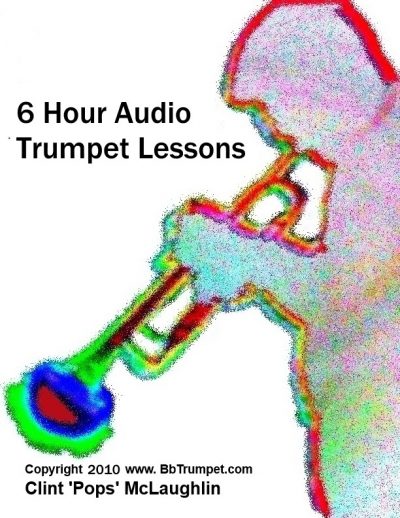