This is the most exciting thing I’ve done in a while.

They are addressed in this report.

The first topic is the basic pencil exercise and the advanced pencil exercise.
Finally pictures showing exactly how to do it.
The advanced exercise while being used for over 40 years has never been written about in any book. It will help to build your range.

If that “minute” of missing practice were 1 minute of a LOUD 3 octaves over High C, then it would might equal the minute on the pencil.
Sadly that missing minute wouldn’t be that.
Playing a 2 octave C scale up and down would involve twice as much time at Low C as at High C. Very little work done. Only 1 out of 15 notes was High C. The workout we envision isn’t what we really deliver.

The 1 minute of isometric is hundreds of times more work than the 2 octave C scale.

Several people make an assumption that the majority of players are already strong.
But most players are NOT pro players. So assuming they are strong isn’t even close to reality.

Isometrics to failure build muscle at rates well beyond what conventional exercise does.

Some years ago a man named Arthur Jones developed Nautilus equipment along with a physiologist named Dr Ellington Darden.
About 12-15 years after he made his 2nd fortune, they did a 1 month long experiment with an old former body builder named Boyer Coe.
Boyer worked less than 30 minutes a day instead of 3-4 hours a day. and because of vastly increased intensity he built muscle faster than he ever had.
The documentation is quite good for the experiment.

When done in a well thought out way, the intense training of isometrics, negatives (of holding past the ability to hold and controlling the fall of the pencil) and even plyometrics (Bouncing the pencil up and down stopping the fall before it gets to the bottom position) can be involved in the pencil exercise.

Chops Builder is a (14 page) 10 week isometric exercise course that will give you screaming chops, more trumpet range and tons of endurance. It has NO music.

The next topic is; how to reduce mouthpiece pressure.
I have discovered a very unique way to hold the horn that allows you to play normally and look normal but prevents you from being able to use excessive mouthpiece pressure.
This includes several pictures to show exactly how and why it works.

The last topic is; about how some people get an open aperture from how they take a breath.
Thousands of players breathe in a way that forces them to reset the chops after every breath. This hinders consistency. Well in this case several pictures are worth more than 100,000 words. Most people never notice this has happened until I show them. But the results from knowing how to stop it are priceless.

This has been known to almost change players lives. 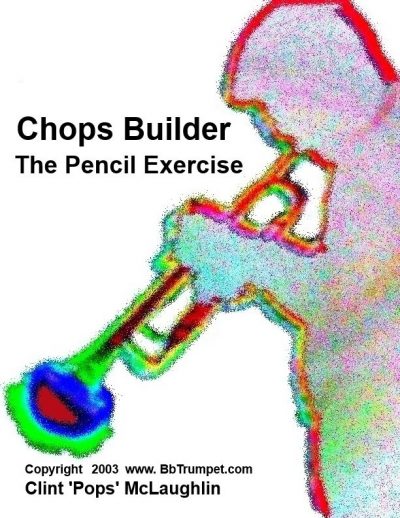