For about 100 years we have known that tension at the side of the face (cheek area) inhibits tone production, lessens endurance and impedes range. Using this part of the face creates a “Smile” but sadly most people still do this to some extent when they play. Most never even know it. Many famous teachers have written about it but people keep doing it.I myself have been trying to educate people about this for 40+ years. (I’ve been writing books about this for 20 years.)

I thought that the best way to show this was to do a Thermal Video Study of players while they were playing. This has never been done before. Nobody ever did thermal images while someone was playing and the video aspect means that not only can you see the muscles being used, you can hear the notes being played.

We centered the video starting at the edge of the lips. It shows some of the chin and all of the cheek. The reason is because the cheek is the part where we want no real muscle involvement. I wanted you to see the smallest of changes in color. In a Thermal Image or video, colors show how much heat is being generated and that means the muscle is working.

Sadly tripods were useless because many players move too much to keep a tight cropping on the face and we had to hand hold both the thermal camera and the video camera to follow them. That is why you see the shakiness in the videos but the stills (from the thermal camera itself) are clear.

Every time I do these I get better and I am now on my 3rd Thermal Camera. (Most thermal cameras are not sensitive enough or don’t refresh often enough per second to be of any use. You learn what will and what won’t work but it can be expensive. LOL)

The box shows where we kept the Thermal Camera lined up. 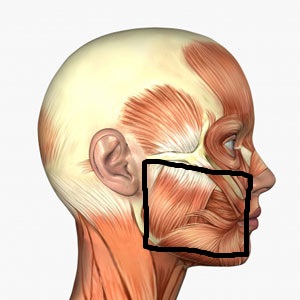 I have been asked several times who I used for the studies.
I had comeback players who had been back to playing for 1 week, 1 month, 6 months, 1 year, 2, 3, 4 years. I had some college players, some College grads with BM and MM degrees. I had a couple of pros who do session gigs on CDs and Movies and I had everything in-between.

I used mostly people who I had never given a lesson to.
I did this because I wanted to see what the general playing population was like when it came to using the facial muscles.
(I already knew what I taught people to do and so I didn’t need many files of my own students.)
I actually bartered time with people that I hadn’t ever worked with before.
I took readings and did a study with the new player in exchange for a free 1 hour lesson (After the study was filmed).
That way I had fresh info from all types of embouchures and groups of players.

I tried really hard to let the study show the results and I didn’t try to lead it one way or another.

This is the first video study of its kind in the world.
The White and Basmajian study in 1973 put electrodes on 4 muscles but this study doesn’t tell us if the other muscles are involved. (It takes 23 muscles to smile and they tested only 4 muscles so lots of info is missing.)

The Bertsch study in 1998 took thermal pictures before warm up and 30 seconds after warm up. No pictures were taken during playing. So we don’t know when the muscles were used, or what notes triggered the muscle use. We don’t even know the range used in the warm up.

I however; decided to take video of players as they play and change pitches. This way we get to see what happens as we play.
We decided to just include the corner of the lip and keep the temperature box in the center of the cheek.

Abstract concerning muscles and embouchure based on full study.

3 short clips from my Thermal Imaging study of players

Player with worst range playing top of staff G.Lips and mouthpiece are blue.Muscles around lips are green and yellow. Cheek muscles are red and white (HOT). Cheek temp is 35.8 C a full 2.4 C hotter than player with the best range on the same note. (Roughly 4 degrees F hotter.) 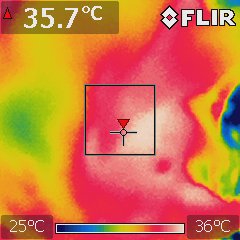 Player with the best range playing top of staff G. (Me) Taken from other side of the face. Lips on lower left are blue and slightly frowned.Muscles around lip and under them are red. Hot spot in cheek is 33.4 C. 2.4 degrees cooler C or 4 degrees F cooler than the player with range issues. 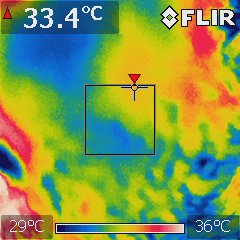 This study is a comeback player. He had been playing about a month and it gave a perfect example of some standard tension problems.

Thermal video of the side of his cheek. See the sudden heat (color) change from one note to the next. On E (the 3rd note) he starts tensing up as he holds the note. A similar thing happens on A. That is a big increase in needless tension. 35.5 C max on Middle C.

This player shows a real difference between C D E and F in sound and looks on the Spectrum Analyzer.
This is something that we want to learn to hear in our sound.

Listen to the difference between Low C with some peaks and F with lots of peaks. Listen to the hollow part of the sound on D and E, they have a dip between peaks and we can hear it.

On the Thermal his heat is in his frown at the side of his lips.

Pictures of his notes showing the dip where he sounded hollow. 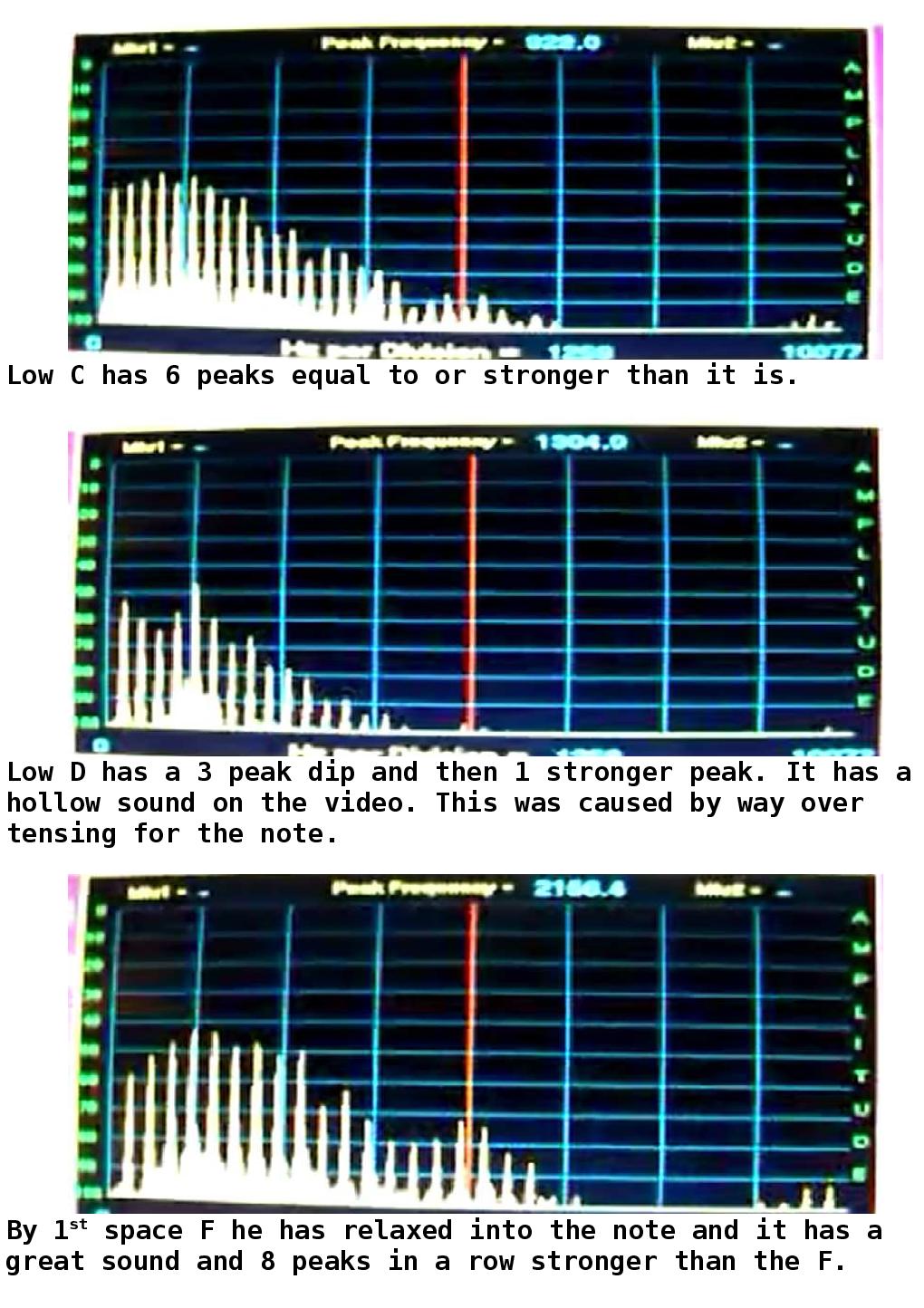 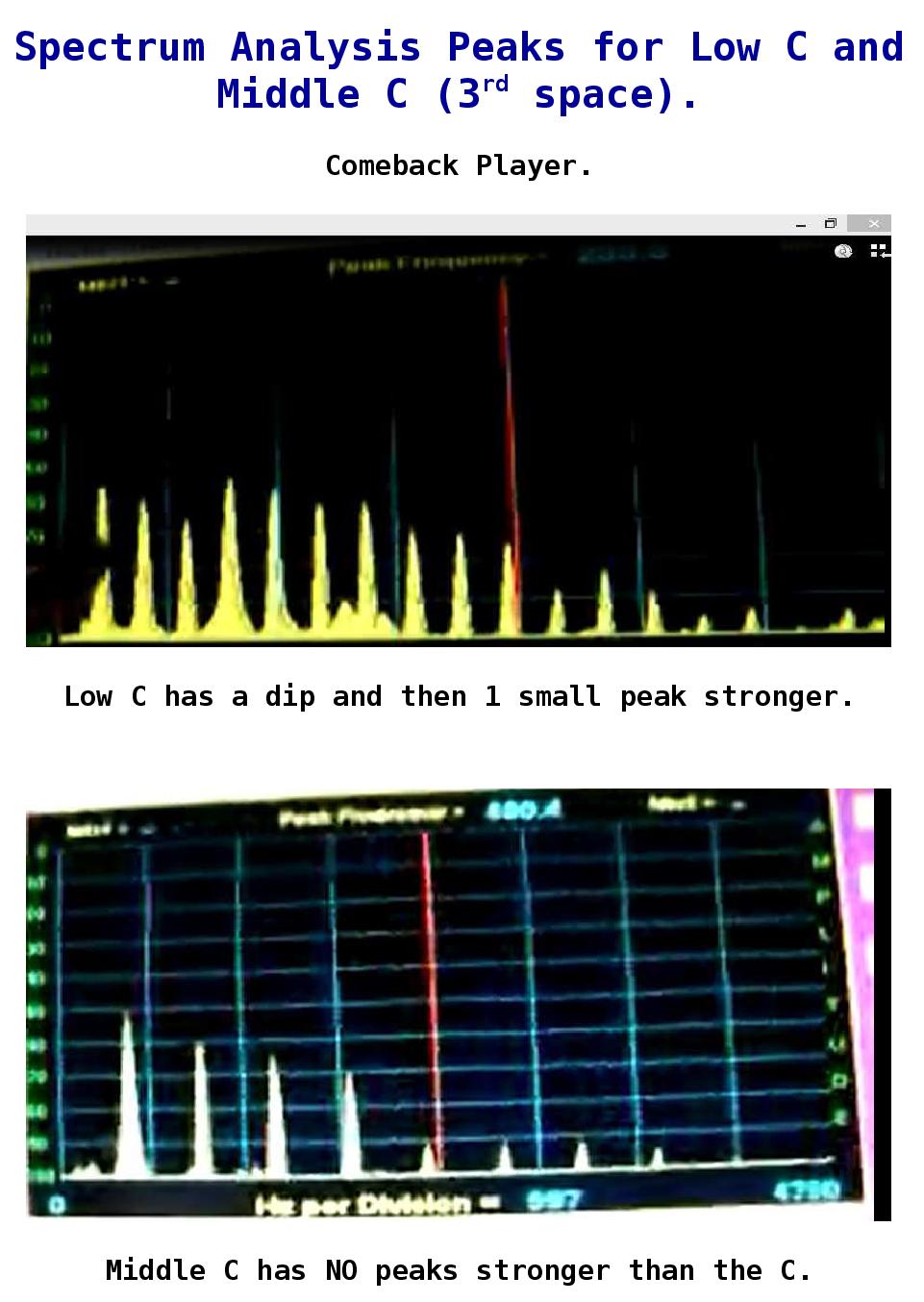 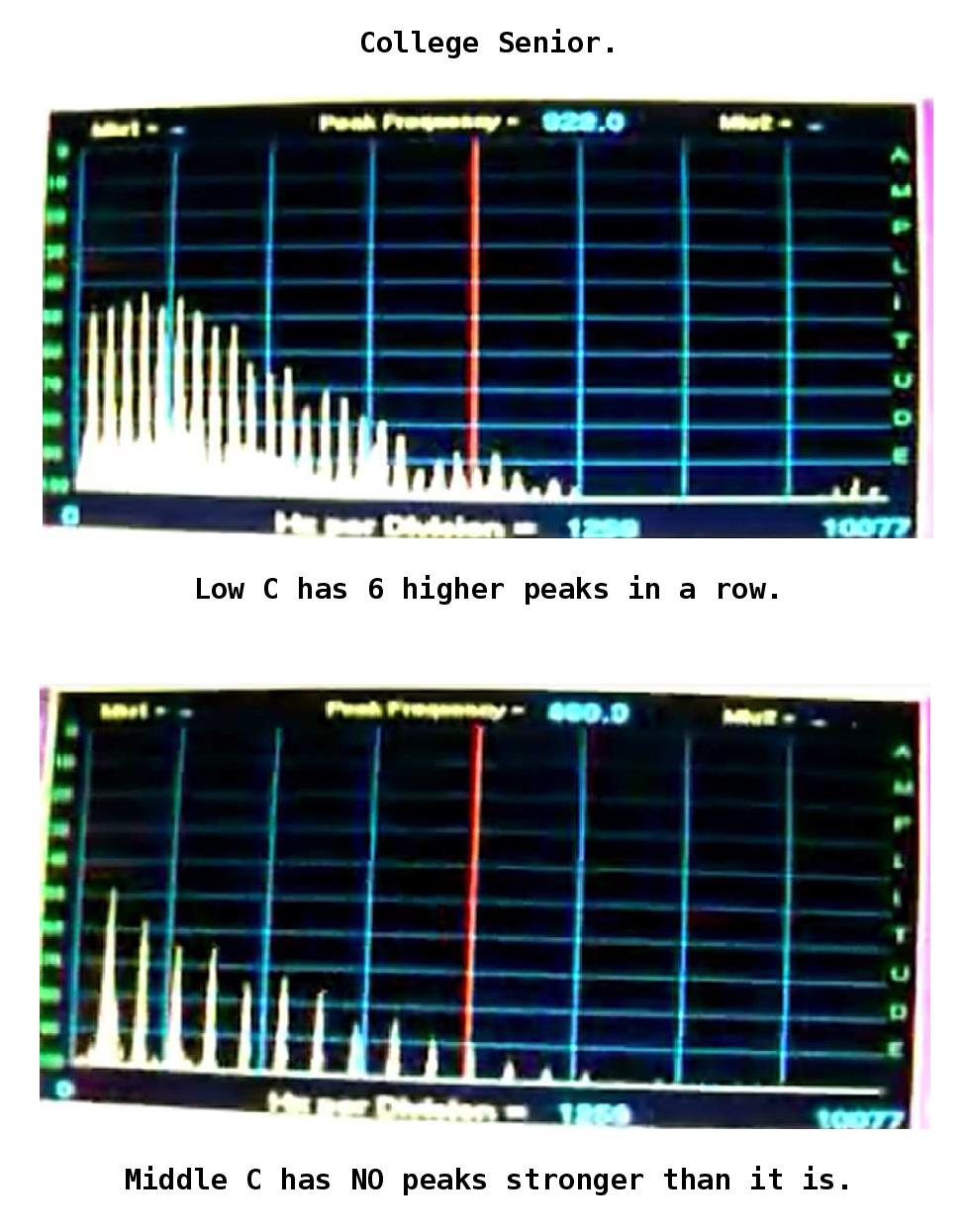 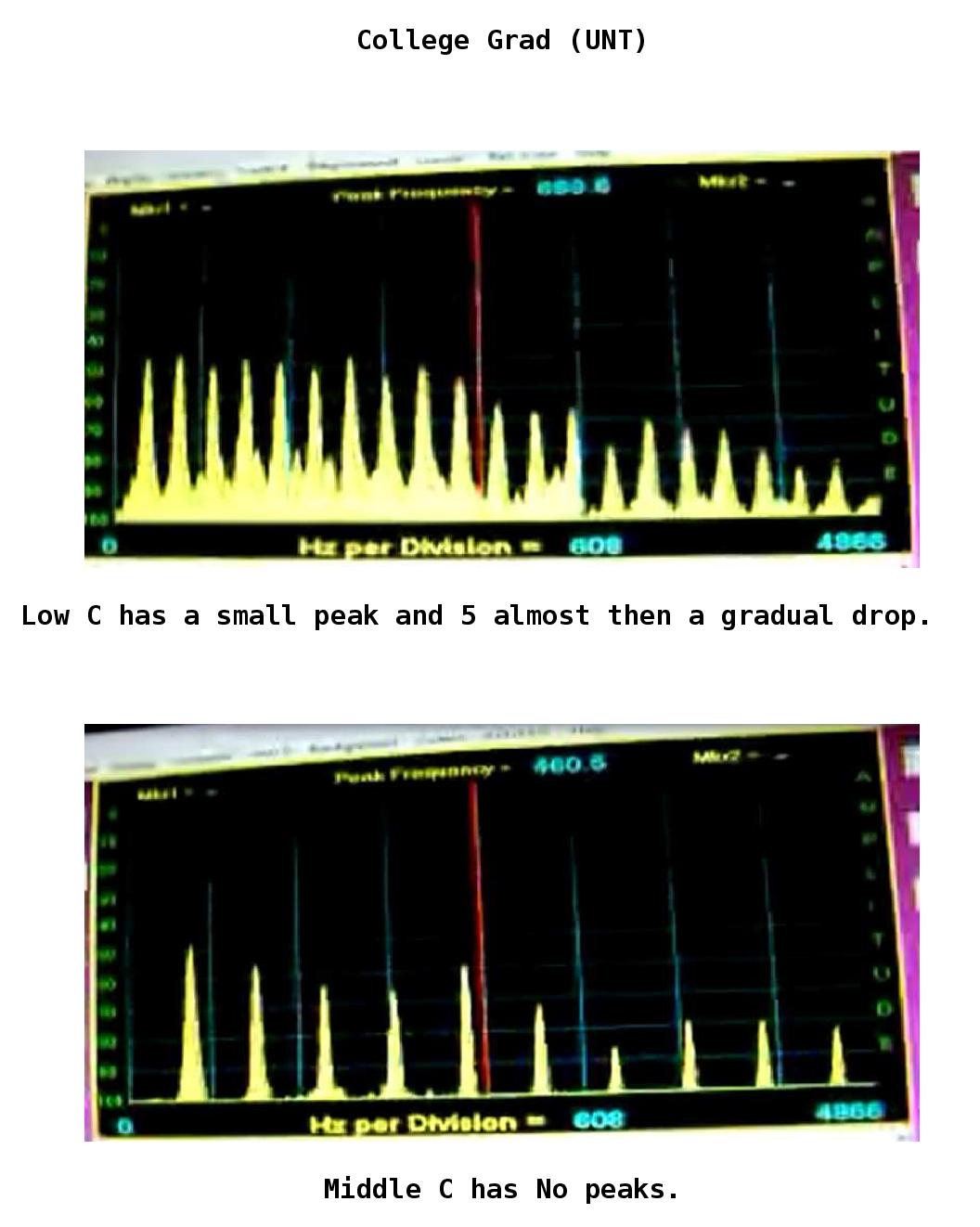 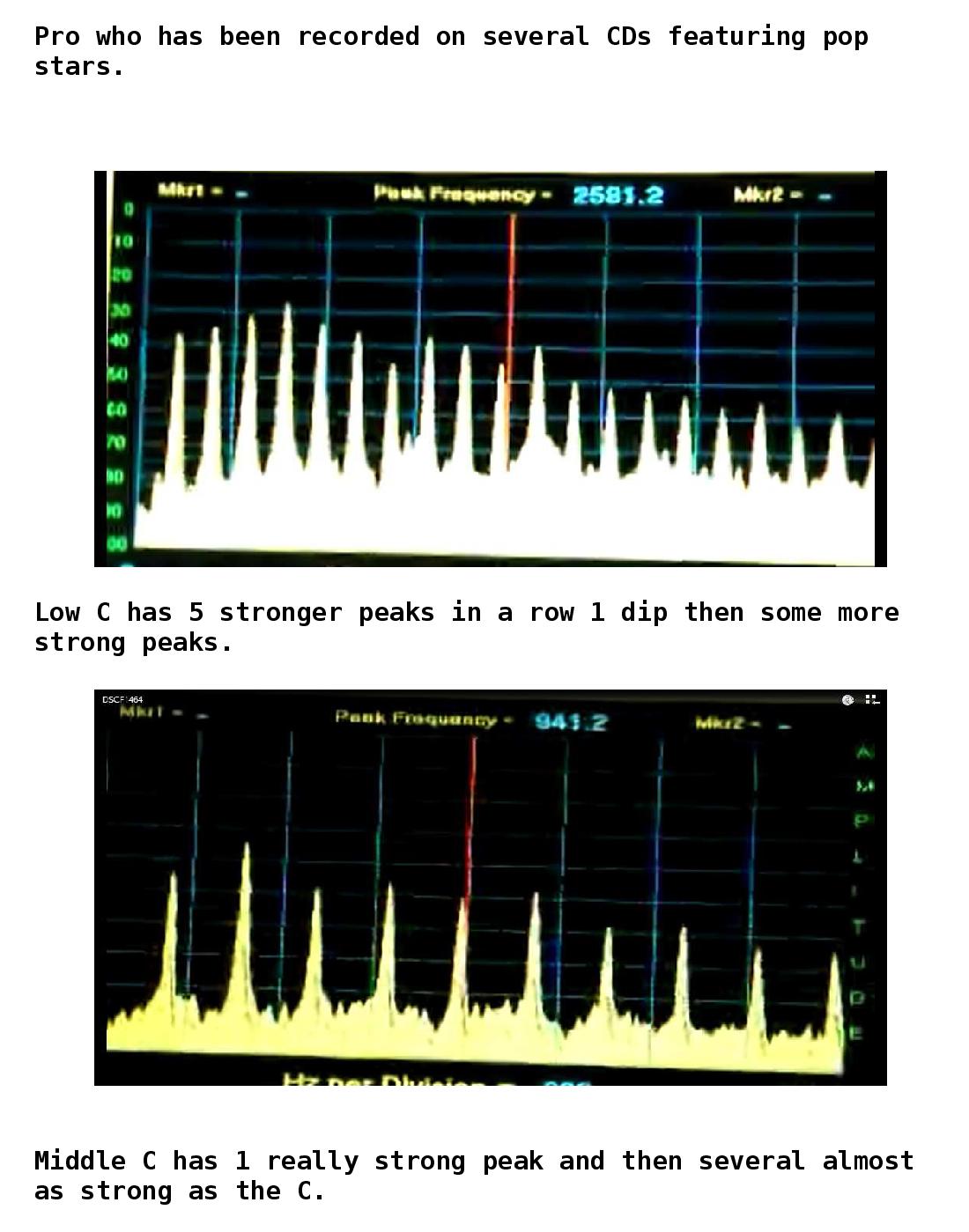 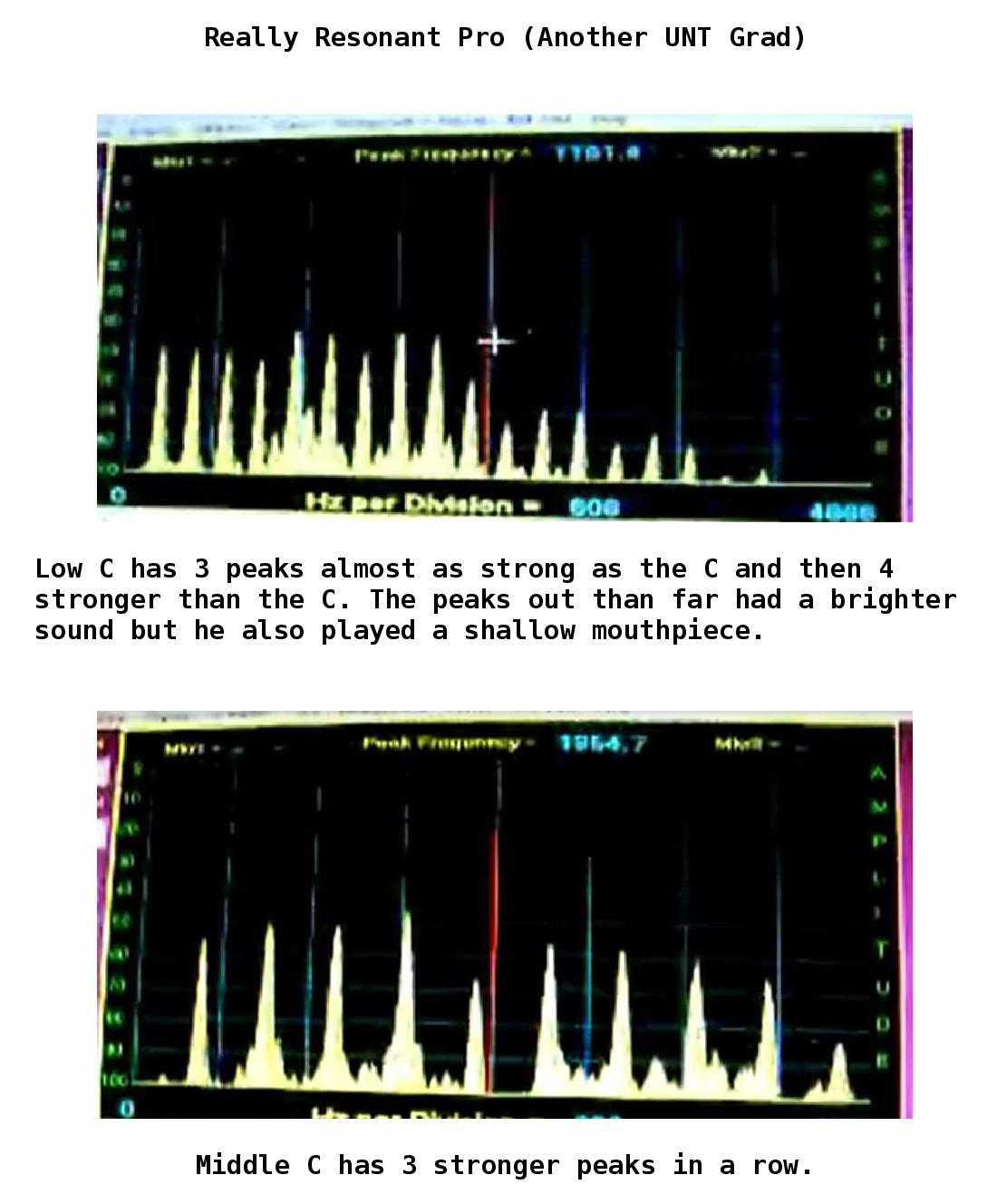 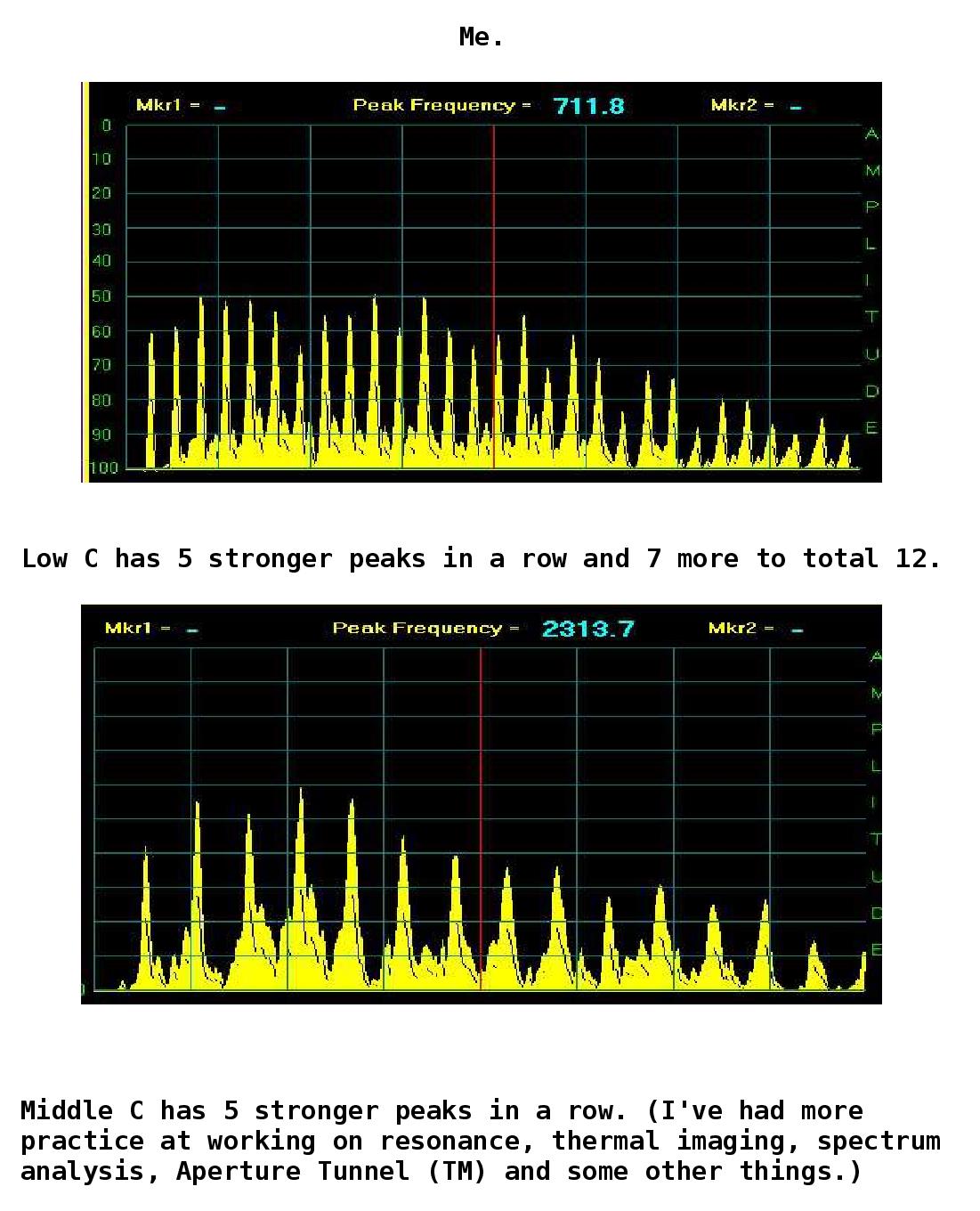 What does it all mean?

I noticed that every time they played a bad note (much less volume, lost resonance, no pitch center…) all 3 tests showed what we all heard. The decibel meter registered a much smaller sound. The Spectral Analyzer showed that the player had no peaks. And the Thermal Imager showed that the player used and heated up the muscles on the side of the face.

The players who didn’t use the muscles on the sides of the face also were significantly more resonant.

My 2 books Tension-Less Playing. and The 4 Trumpet Octave Keys. deal with the findings of this study.